WHAT IS A DFB LASER?

The acronym DFB stands for distributed feedback laser. Their key features relative to other semiconductor lasers are their single longitudinal mode (single frequency) emission profile, their high stability and their tunability. These single frequency laser diodes are used in applications such as fiber optic telecommunications, spectroscopy, metrology and atomic physics. This sub-category of semiconductor lasers employs Bragg diffraction gratings in the active gain region of the semiconductor to form a waveguide. These diffraction gratings are designed to deliver periodic changes in the refractive index which cause reflection back into the cavity of the laser. Unlike Fabry-Perot laser diodes, which utilize mirrors at both ends of the laser cavity, the reflection of the laser light in a DFB laser is along the entire cavity. DFB semiconductor materials include indium-phosphide and gallium-indium-arsenide-antimony. (read more »)

For an overview of the DFB laser structure with diagrams, this video is great beginner’s summary:

The primary advantage of a DFB laser is that one axial resonator mode prevails over the other modes. This yields a relatively narrow single mode emission peak (single longitudinal mode) at the desired wavelength. Their single mode waveform is particularly desired in applications such as gas sensing and telecommunications. They are inherently more stable than most other laser diode structures, meaning that they don’t mode hop. Mode hopping is a disadvantage of Fabry-Perot lasers. DFB's can typically be tuned by temperature and injection current over several nanometers from their center wavelength. As a general rule, a DFB can be tuned around one nanometer with a ten degree temperature shift. This feature, combined with their narrow linewidth, makes DFB’s particularly desirable for sensing applications which require tuning the wavelength and a narrow linewidth to locate a gas absorption line. DBR and Discrete Mode lasers are also used for these applications. There are several manufacturers of discrete mode (DM) lasers that offer single mode performance at a more competitive price. DBR's tend to be more expensive than DFB's. 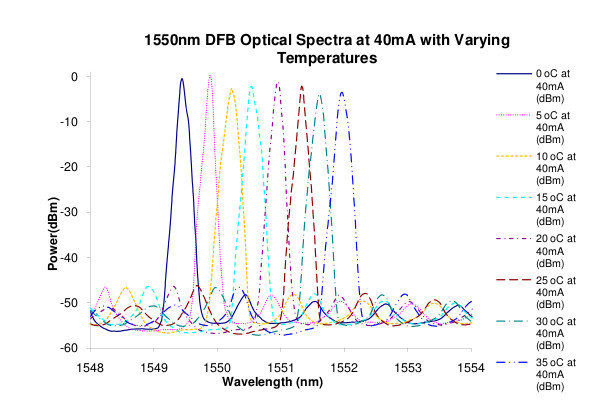 DFB’s are available at wavelengths from 640nm to 14,000nm. The most common wavelengths include 1064nm, 1310nm, and 1550nm. 1064nm devices are commonly used as seed sources in fiber lasers while 1310/1550nm devices are used in many telecommunications applications. DFB’s are used in many spectroscopic sensing applications and atomic physics applications. The specific wavelength of the DFB is chosen for its advantages in the given application. For example, a 1278nm DFB may be chosen for Hydrogen Fluoride detection since there HF exhibits strong absorption at this particular wavelength. For an in depth explanation of DFB laser’s used in absorption spectroscopy, please refer to this article DFB lasers between 760 nm and 16 μm for sensing applications »

As previously mentioned, DFB laser fabrication, packaging and testing is a complex and expensive process. The process starts with an epitaxial wafer, which is a wafer of semiconducting material made using epitaxial growth methods. The wafer substrate material is silicon, but the epitaxial layer is comprised of exotic materials which have the specific qualities that are desirable for the laser’s wavelength and power level. The epitaxial layer is a high index quantum well structure between an upper and lower cladding layer. The gain region of the laser is etched along the upper cladding layer. The Bragg grating, which is the feedback region, is fabricated along the gain region. The grating is then buried under another lower index cladding layer to produce the desired feedback properties and the desired emission properties. An AR coating is applied to one end of the laser to facilitate the grating selecting a single mode. After the wafer has been processed, it is cleaved into bars of DFB laser chips and then each chip is singularly cleaved from the bar to form an individual chip on substrate (COS), also referred to as a chip on carrier device (COC). The COC goes through various tests including a burn-in high heat test to weed out faulty devices prior to the expensive step of packaging the COC. The COC device is then packaged and a final test is performed. This final test is typically a PIV test. This is a test of the optical output power as a function of current and voltage to check the laser’s performance and quality.

DFB lasers are typically much higher in price relative to a Fabry-Perot device with a similar wavelength and optical output power. Quite a few factors contribute to the higher cost of DFB’s. But the high price of these lasers is primarily a result of their low yield rate in manufacturing and in the cost of the manufacturing processes. Expensive fabricating and etching of the semiconductor materials as well as applying specialty coatings are several of the cost drivers. Also, their low yield rate requires each device to be individually tested in manufacturing. This also adds a lot of cost to the final product. The test typically includes scan of the power, wavelength and forward voltage. This is commonly referred to as “PIV” or “LIV” testing. This testing can be done when the DFB is at a chip on carrier level to screen out failed devices. But this test is typically repeated after the device has been packaged and is being prepared to be sold. All of the screening and testing burdens these devices with additional cost relative to more simple multimode Fabry-Perot lasers. Of course Fabry-Perot’s do not have simple structures. But they are less expensive to manufacture. The basic lasing structure of a FP incorporates two reflectors (mirrors), one at each end of the laser cavity. When the photons are emitted from the semiconductor material, the light bounces repeatedly between these two reflectors. Because these reflectors are broad area, multiple longitudinal modes are created. But one of the reflectors will have lower reflectivity than the other. So the light emits from the high reflectivity mirror. As summarized in the first paragraph, the reflection of the light in a DFB laser is along the entire grating structure along the cavity. The result is a stable, single mode output. For more information on the math and physics which define the grating structure, you can get in-depth information in this article from Cornell University titled Distributed Feedback (DFB) Structures and Semiconductor DFB Lasers overview »


WHAT ARE THE COMMON PACKAGE STYLES AND PRICES?

Excluding high volume telecom devices, the most common package styles for DFB’s are TO-can and fiber coupled butterfly. The butterfly is a 14 pin package roughly 30mm x 15mm x 10mm. This package style typically has a fiber patch cord coming out of the package. This patch cord is aligned to the laser diode’s front facet emitter and welded in place inside the package. The butterfly packaged device usually has a micro thermoelectric cooler with a 10K thermistor to monitor and control the temperature. It also has an embedded photodiode to measure the light coming out of the rear facet of the laser as well as an isolator to prevent back reflection of the laser light back into the cavity. The most common TO-can style is the 5.6mm diameter package, officially referred to as a TO-18. These are small 3 pin package styles that emit the laser light in a “free space” mode through a glass or lens placed over the top of the emitter. The TO-18 will usually have a monitor photodiode inside the package, but no cooler or thermistor. The price of DFB’s varies widely with the package type and the scale of manufacturing for a particular power and wavelength. For example, a TO-can packaged 1550nm DFB can be purchased for as little as $150.00. A 1651nm device in a butterfly package with a single mode fiber can cost over $3,000.00. For more information on pricing, visit the article how much DFB lasers cost »


WHERE CAN I BUY DFB LASERS?

There are over 50 manufacturers of packaged DFB lasers worldwide. A small sub-set of these companies offer devices that are manufactured “in-house” from start to finish. They control the manufacturing process from wafer growth through final packaged device testing. A larger sub-set of companies purchase the laser chip from a wafer fabrication facility and then add value on the back-end of the manufacturing process. The term "back-end" includes testing the laser diode at a chip on carrier or bar level, packaging the device, fiber alignment / coupling and post packaging tests. For a list of commercially available DFB’s and the companies who sell them, please select the wavelength of interest from the shop DFB lasers section »