An Overview of Current and Temperature Tuning Coefficients

This article will help you understand the underlying principals used to derive current and/or temperature tuning coefficients.

One of the advantages of semiconductor laser diodes compared to other laser technologies is their ability to be tuned to an adjacent wavelength. An important specification for laser diode’s used in tunable diode laser absorption spectroscopy (TDLAS) is the laser's tuning coefficient. This is specified on the data sheet as picometers of change per milliamp of change in the bias current, and nanometers of change per change in degrees Celsius. More and more sensing and spectroscopic applications are emerging which require tuning the output of single mode semiconductor lasers in order to measure the abosorption level of laser light through a gas sample. This absorption level is then used to derive the concentration of the gas molecule of interest in the sample. Once the concentration level is established, monitoring and feedback control systems can be implemented. This article is an overview of the underlying principles of the tuning coefficient, also known as the tuning derivative. 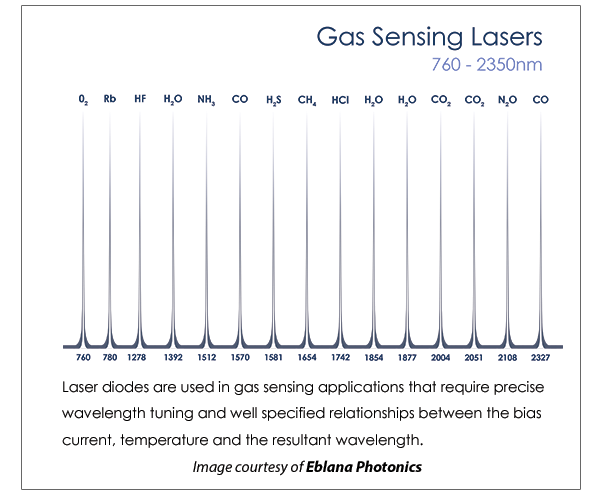 Laser diode sources are used in a wide array of sensing applications that require tuning. DFB lasers are commonly used for absorption based sensing of gases such as carbon dioxide, ammonia, methane and hydrogen fluoride. Single mode and single frequency lasers are also used in applications which require precise tuning and control of the frequency of the source such flourescence for in vivo cancer imaging. NIR flourescence uses a near infrared source to excite a species, which in turn will emit a specific frequency of light at a longer wavelength than the original wavelength which was used to excite the species. You can read more about non-invasive fluorescence imaging using a modulated ICCD and laser diode in this article on OSA.org »


PHYSICAL CHANGES TO A LASER DIODE FROM VARYING TEMPERATURE AND INJECTED CURRENT DENSITY:

The lasing wavelength of a laser diode is typically controlled by varying the temperature and the injected drive current. The physical changes to the laser diode resulting from varying these two control parameters are listed below and shown in Figure [1]. 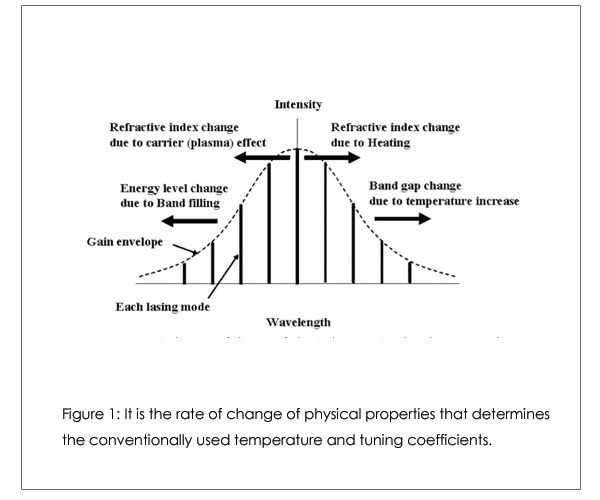 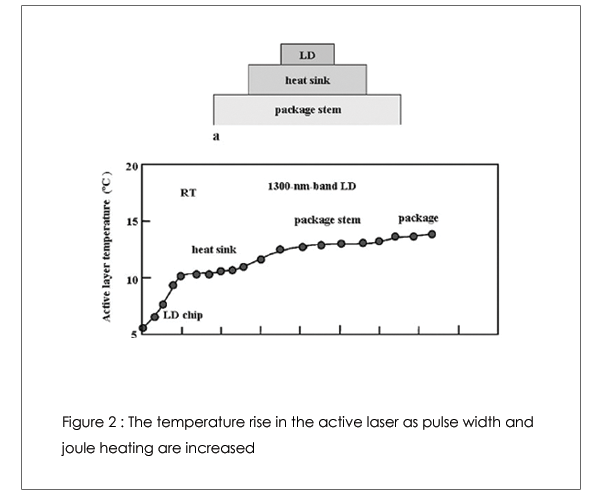 effect of increasing heat on a laser diode

The tuning coefficients stated on a laser diode’s data sheet are primarily derived from inducing temperature changes in the active layer of the semiconductor and monitoring resultant wavelength changes. Tuning coefficients are listed on laser diode data sheets as pm/mA and/or nm/°C. Tuning coefficients will vary with the scanning rate used to monitor the changes in wavelength associated with changes to ambient temperature or injected current. The scanning rate is typically strictly fixed to eliminate monitoring errors. Also, while not discussed in this article, it is important to note that since the change in lasing wavelength is primarily caused by a change in junction temperature, it is common to first establish a baseline “known” junction temperature at a given current and temperature control set point. This is typically a measurement of changes to junction voltage and thermal resistance related to changing injection current.